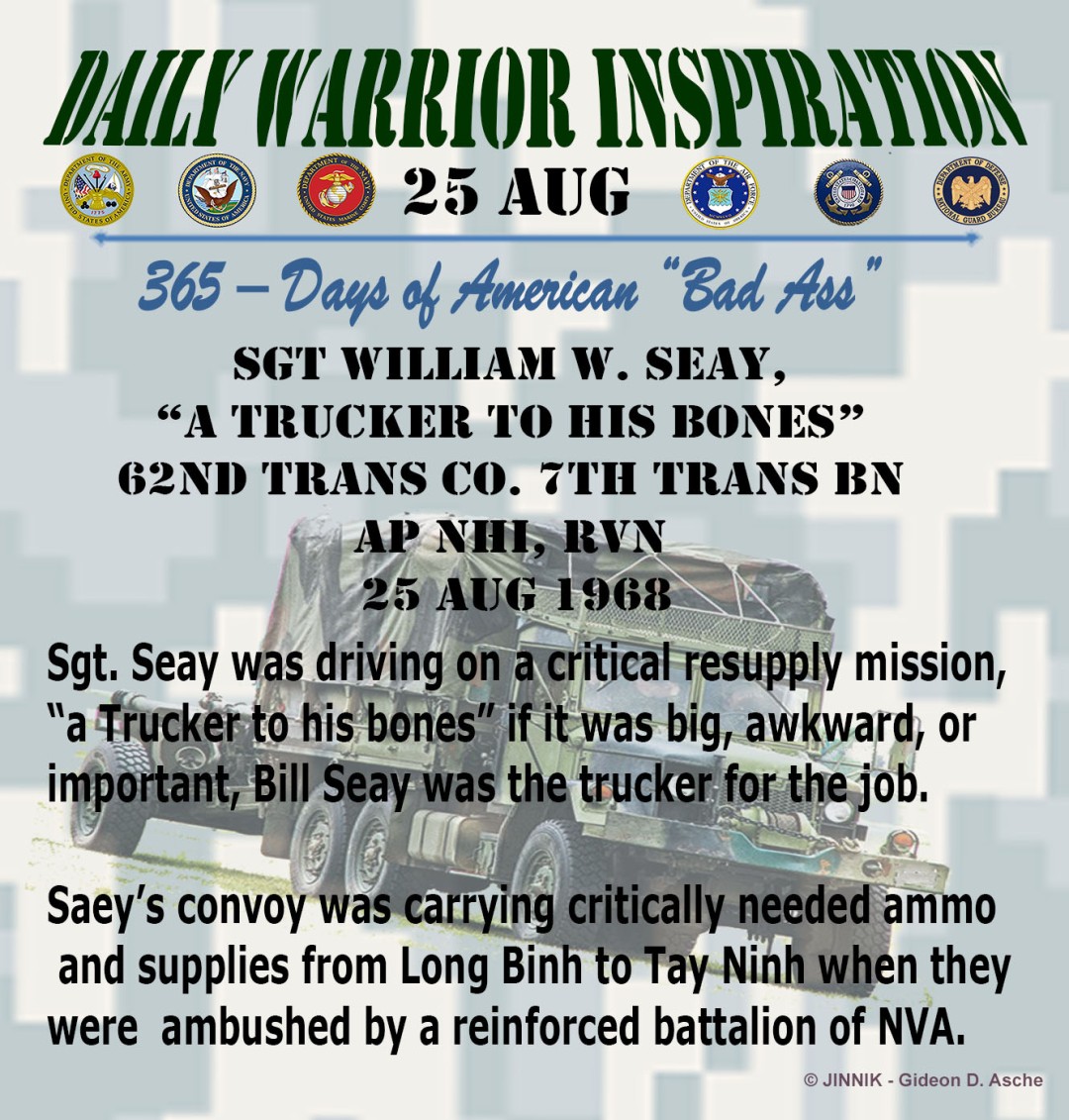 Sgt. Seay was driving on a critical resupply mission,  “a Trucker to his bones” if it was big, awkward, or important, Bill Seay was the trucker for the job.

Seay’s convoy was carrying critically needed ammunition and supplies from Long Binh to Tay Ninh when they were ambushed by a reinforced battalion of NVA. The lead elements of the convoy entered the ambush kill zone and were met by intense rocket, machinegun fire from well-concealed and reinforced positions.

Sgt. Seay immediately dismounted his vehicle and took a defensive position behind the wheels of a vehicle loaded with high-explosive ammunition. The NVA approached to within 10 meters of the road allowing  Sgt. Seay to engage them killing 2 of the enemy after which Seay spotted a sniper in a tree and eliminated the threat.

An enemy grenade landed and rolled under an ammunition trailer, Seay left his protective cover, exposing himself to intense enemy fire, picked up the grenade, and threw it back to the North Vietnamese position. Another enemy grenade landed very close to Sgt. Seay’s position. Again Sgt. Seay threw the grenade back upon the assaulting enemy–  killing 4 more of the enemy.

Severely wounded, Sgt. Seay continued to give encouragement and maintained command of his fellow soldiers.  They were holed up in a shallow ditch when Seay noticed 3 enemy soldiers who had penetrated the position and were preparing to fire on his Soldiers.

In spite of his wounds and extreme loss of blood and with one hand useless, Sgt. Seay sprang to his feet and fired his rifle with his left hand, killing all 3 enemy sappers and saving the lives of his men.

Before he could take cover Sgt. Seay was mortally wounded by a sniper’s bullet.

I imagine it was a supernatural “Convoy” that delivered this Trucker to the Pearly Gates.  I doubt if they had to worry about “Weigh stations” or Smokeys that day.