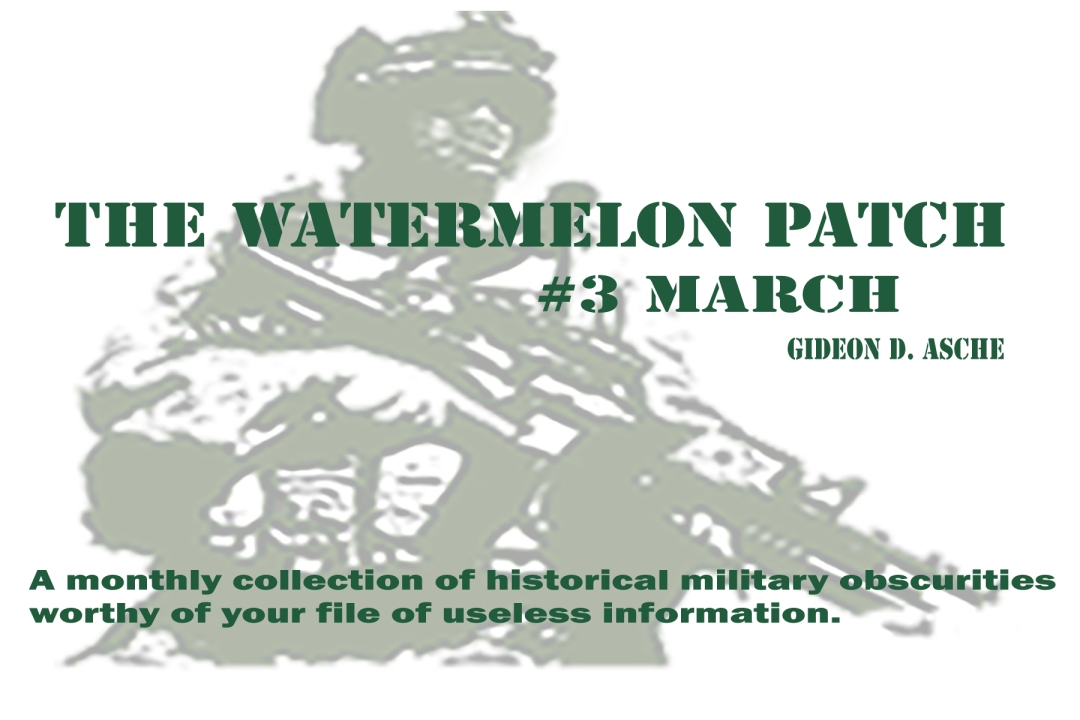 *the place where Watermelons grow –A collection of historical military obscurities worthy of your file of useless information.

As Warriors, we assume the lineage of those who went before us, and only in knowing our lineage can we honor them.  January is a month of beginnings – Hookers, Heroes and Phocidae alike can be found in our joint history as Warriors.

March is a month full of heroism and tradition.

The United States Military Academy was founded by congressional order in March 1802, “for the purpose of educating and training young men in the theory and practice of military science.”

Perched on the high west bank of the Hudson River, the original fort was built during the Revolution as a bastion against British attack. The traitor Gen. Benedict Arnold plotted to surrender the fort to British troops for a price of ℒ6000.

His scheme uncovered, Arnold fled to the British for protection. Even today, the name  “Benedict Arnold” invokes images of treason and dishonor to most Americans.

In the 1820s, a new Commandant, Col. Sylvanus Thayer, reorganized the school and transformed it into one of the finest institutions of higher learning in the world.  With an enrollment of over 4000, the USMA at West Point produces the Crème of the Officer Corps.  They can be a little arrogant in the first year of their commission, but once the NCO Corps nurtures them past the “Ring Knocker” stage, there are few officers in the world whom I would more readily follow into a fight than a West Pointer. – If they would just beat Navy occasionally, I would be a happy man.

The Battle of Iwo Jima came to an end in March of 1945, with American troops securing 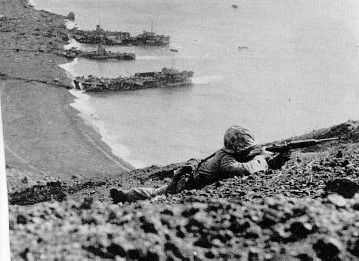 the island at the cost of approx. 6000 U.S. lives and upwards of 20,000 enemy dead – a total of fourteen Medals of Honor were awarded to men who fought there.

March of  ‘45 also saw activation of the first Squadron of Tuskegee Airmen. Jim Crow laws were still on the books, and the military was racially segregated.

Most likely derived from a welcomed call on the intercom – crewmembers, seeing the distinctive red tail on Tuskegee fighters arrive as escorts would joyfully inform the rest of the group with the shout of “Red Tails,” followed by a group sigh of relief.

Bomber crews knew that if “Red Tails” were at their side – it meant they were safe.  Red Tails wouldn’t follow decoy attacks and refused to leave their charge to chase down an easy kill.  It didn’t matter what the Hun threw at them; Red Tails stayed with their bombers. 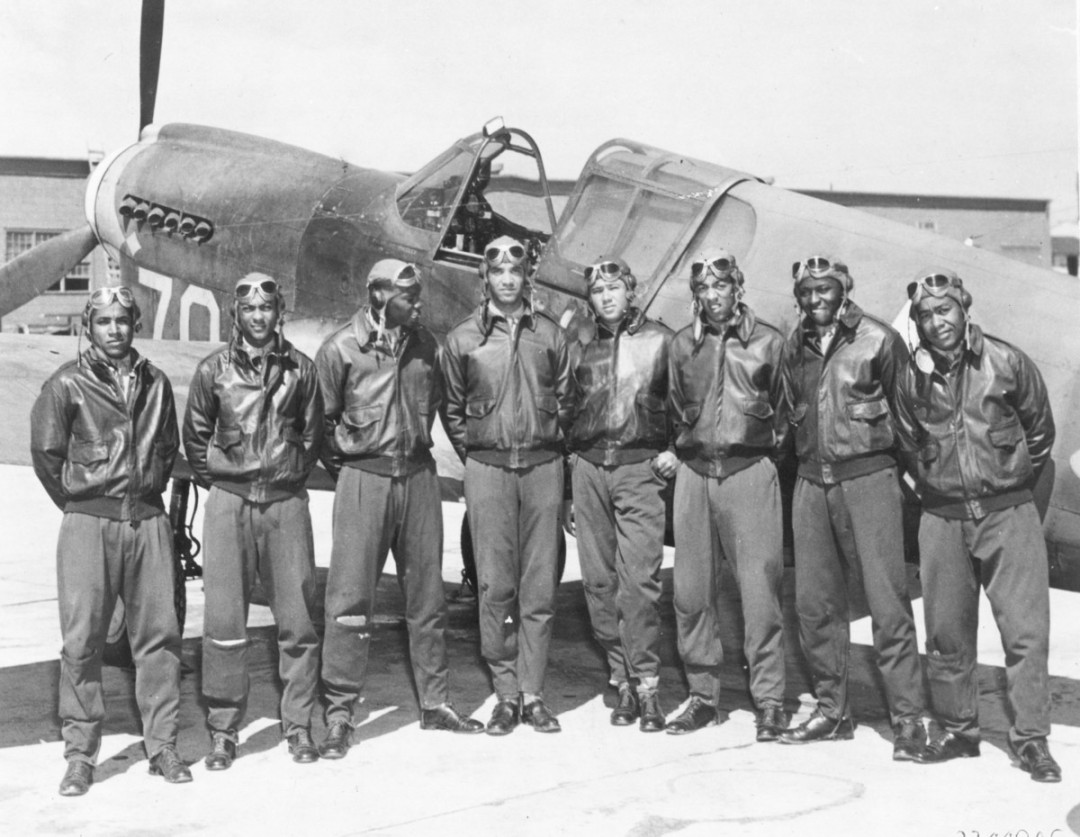 They counted success in the number of bomber crews who made it home, not German fighters they shot down, but they shot down their share.  The Luftwaffe learned there were much easier targets than one with a flock of “Red Tails” in tow.

March 24th, 1944 – Seventy-six Allied officers escaped Stalag Luft 3, in Austria.  This was an incredible feat of engineering since the camp was intentionally built on sandy loose soil to prevent tunneling.  The Majority of the escapees were rounded up and shot.  Their story was later immortalized in the 1963 film “The Great Escape.”

March 1939 – The Massachusetts legislature finally agreed to ratify Madison’s ten Amendments as proposed. Almost 150 years had passed since Madison presented the list of amendments we now refer to as the Bill of Rights. 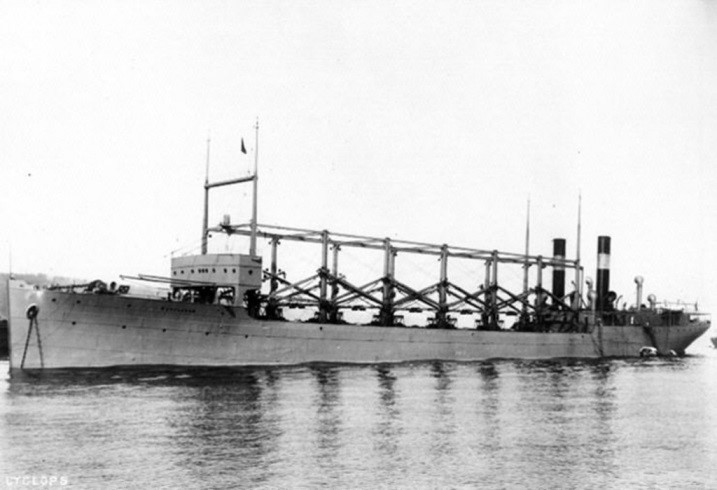 March 1918 – The USS Cyclops departed from Barbados and was never seen again. It is presumed the vessel was lost with all hands.  Her loss remains the single largest loss of life in U.S. Naval history, not directly involving combat, and was the first of many vessels and aircraft to disappear in the area we call the Bermuda Triangle.

In an odd turn of events on Sunday, March 4th, 1849, the United States had no president. Pres. Polk’s term ended on a Sunday. There was no Pro-tem because his term also expired on the 3rd.  This coincidence meant Zachary Taylor couldn’t be sworn in until after the new vice president took the oath the following day.  Changes in the rules of succession make it impossible for it ever to happen again.

March 5th, 1927 – 1,000 US marines landed in China to “protect American property.”  The Marines would not allow a repeat of the Boxer Rebellion. 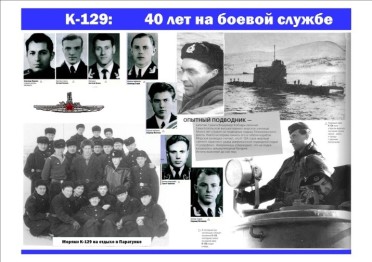 Halibut recovered three live Nukes, Soviet codebooks, and encryption machines. In 1974 a second salvage operation was conducted by American intelligence services.  An additional 100-foot section of K129 was raised and found to contain two nuclear torpedoes and the remains of 6 Soviet sailors. 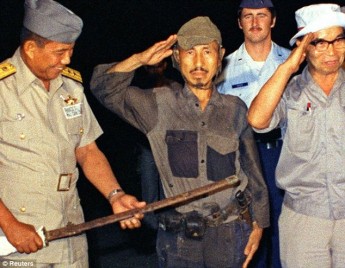 Onoda and a small group of his men survived for years in the Jungle, refusing to believe that Japan had surrendered.  Over the years, his comrades passed, and Onoda was left alone but continued to evade and conduct gorilla operations.

He is blamed for several post-war deaths. Onoda’s orders were to “conduct guerrilla warfare and DO NOT DIE.”

Lt. Onoda was finally convinced to surrender in 1974, but only after his Imperial Army war-time commander went to the Philippines personally and officially released the old Warrior from duty. Technically, Onoda never surrendered – He fulfilled the last order he was given – Respect! 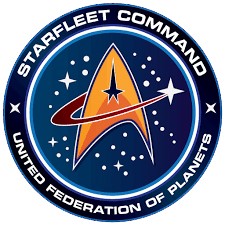 March 26th, 2233 – James Tiberius Kirk will be born.   He will command the Federation Starship Enterprise, eventually reaching the rank of Admiral and saving our world form utter annihilation several times on the way.  It is acceptable, and expected, to hum the theme music as you read on.

In July of 1862, President Abraham Lincoln signed into law a measure authorizing a “Medal of Honor” to be awarded in the name of Congress.  It was to become our Nation’s highest award for bravery in the face of an enemy. The men who had the watermelons to earn this award should be remembered. 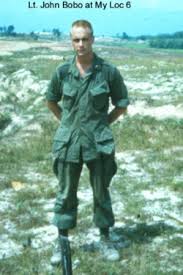 Realizing the gravity of the situation, 2Lt Bobo organized a hasty defense and kept his men in the fight.  Outnumbered and under murderous fire, Bobo saw an unmanned rocket launcher on the battlefield.

Braving enemy heavy machine guns, the Lt recovered the weapon and organized a gun crew to man the launcher while he directed fire on enemy positions.

An enemy mortar round blew Bobo’s right leg clean off below the knee, but he refused to be evacuated.  He ordered his men to move him to a firing position from where he could cover their movements.

Knowing he would soon bleed-out and become combat ineffective, 2Lt Bobo tried to use 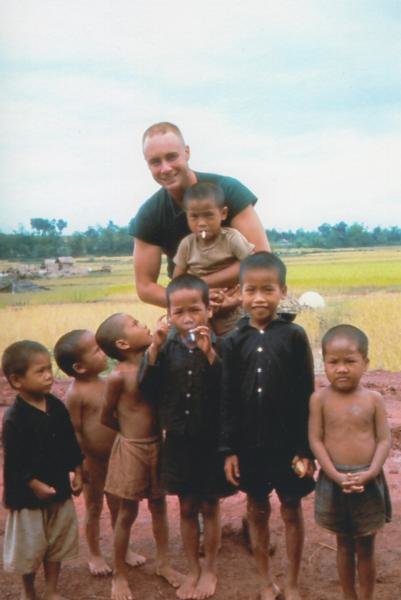 a web belt as a tourniquet.  Unable to get it tight enough to stop the bleeding, the young Lieutenant jammed the stump of his leg into the dirt and bore weight on it, stemming the flow of blood, allowing him to remain conscious and provide covering fire.

2Lt Bobo stood his ground and delivered effective suppression fire on advancing enemy elements preventing his Marines from being overrun by a numerically superior force.

The last line of 2lt Bobo’s Medal of Honor Citation reads as follows:

(2lt Bobo’s) “tenacious stand enabled the command group to gain a protective position where it repulsed the enemy onslaught. 2d Lt. Bobo’s superb leadership, dauntless courage, and bold initiative reflected great credit upon himself and upheld the highest traditions of the Marine Corps and the U.S. Naval Service. He gallantly gave his life for his country.”