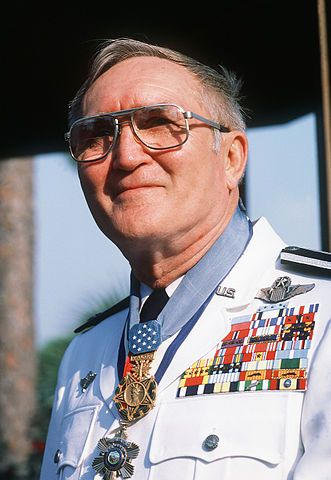 Col. (then Maj) Day was forced to eject from his F-100 over North Vietnam by enemy ground fire. Day’s right arm was broken in 3 places, and his left knee was badly sprained and he was immediately captured by hostile forces.

Col. Day was taken to a prison camp where he was interrogated and tortured.

George “Bud” Day was just seventeen in 1942 when he volunteered for the Marine Corps. Three years of war in the south Pacific then he was off to Law School.

Day joined the Air National Guard in 1950 and was called up for the Korean war as a fighter Pilot. After the Korean war, Day decided he would remain in the Air Force and in 1967 Maj. Day went to war for a third time.

In 1967, Day, now a major, was put in command of an F-100 Squadron and assigned to a top-secret program. Nicknamed the Misty Super Facs, their mission… to fly over North Vietnam and Laos as “forward air controllers,” select military targets and call in air strikes on them.

His captors staged a mock execution, then hung him from a rafter by his feet for several hours. Day played up his injuries as completely incapacitating and his guards relaxed their vigilance. Certain that he was so badly hurt that he wouldn’t try to get away, they tied him up with loosely knotted rope. On his fifth day in the camp,  Col. Day escaped into the jungle where he began his trek toward South Vietnam.

Despite his broken bones and shrapnel wounds, he continued southward surviving on berries and uncooked frogs. He successfully Evaded the enemy patrols and search parties until he reached the Ben Hai River.  With the aid of a bamboo log float, Col. Day swam across the river and entered the demilitarized zone, where, due to delirium, he lost his sense of direction and wandered aimlessly for several days.

After unsuccessful attempts to signal U.S. aircraft, Day was ambushed and recaptured by the Viet Cong. He sustained new gunshot wounds to his left hand and thigh. Day was again interrogated and tortured before he was moved to the  Hanoi Hilton.

Due to his wounds,  Col. Day was completely debilitated and unable to perform even the simplest task for himself. Still, the Colonel continued to offer maximum resistance for more than five years.

On one occasion in 1971, some of the American prisoners gathered for a forbidden religious service, guards burst in with rifles.   Day stood up, looked down the muzzles of the guns, and began to sing “The Star-Spangled Banner.” The other prisoners including Adm. James  Stockdale joined in.

His personal bravery in the face of deadly enemy interrogation and holding his information as long as humanly possible was significant in saving the lives of fellow aviators who were still flying against the enemy.

Col. George “Bud” Day was released on March 14, 1973. Three years later, on March 6, 1976, both he and Stockdale were presented with the Medal of Honor by President Gerald Ford.