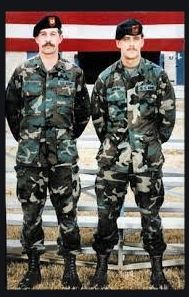 While serving as a 2 man Sniper Team Leader, with Task Force Ranger in Mogadishu, Somalia. MSGT Gordon and SFC Shughart’s sniper team provided precision fire support from the lead helicopter during an assault and at two helicopter crash sites.

When Master Sergeant Gordon was informed that ground forces couldn’t get to the crash site, the two snipers unhesitatingly volunteered to be inserted to protect the wounded personnel in the aircraft.

General Garrison would not order men into a situation he did not believe they would survive and initially refused until both soldiers made it clear they understood that their request was likely suicidal.

Garrison approved and the two were inserted approx a kilometer from the crash site. They fought their way to the downed Blackhawk where Gordon immediately pulled the pilot and the other crew members from the aircraft, while Shughart established a defensive perimeter.

The two snipers killed an undetermined number of the enemy, fighting until their ammunition was depleted.  After his team member, SFC Gordon was fatally wounded and his own rifle ammunition exhausted, Sfc. Shugart returned to the wreckage, and gave the Pilot a weapon with the last five rounds of ammunition, shook his hand and said “Good Luck, Brother.”

Armed only with his sidearm, SFC Shugart continued to defend his charge until he was fatally wounded. Gary Gordon and Randy Shughart gave their lives without hesitation so that Mr. Durant (the Pilot) lived to fight another day.