While conducting an air raid at Pittham, Belgium, Talbot and another aircraft were separated from the squadron because of mechanical issues.

Talbot and Robinson were jumped by 12 enemy aircraft, with no place to run, they turned to fight.

Robinson was shot through the elbow making his arm useless and his weapon jammed. 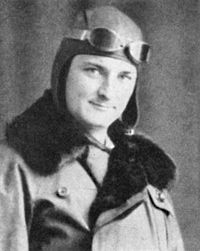 He furiously worked, one-handed, to clear the jam while Talbot maneuvered into firing position.

They engaged the flight of enemy aircraft downing at least one and continuing the fight until Robinson was wounded twice more and lost consciousness.

With Gunney unconscious and his motor failing, he dived to escape further attack and crossed the German trenches at an altitude of less than 50 feet.

Knowing his Gunner would never survive unless he received immediate aid, and in spite of the risk, 1Lt Talbot flew past his Aerodrome and on to the next field hospital delivering Gunney Robinson to medical aid and saving his life.

Both Talbot and Robinson were awarded the Medal of Honor for their bravery under fire.

Second Lieutenant Talbot died 1 week  later on October 25, 1918, when his DH-4 crashed on takeoff, during an engine test flight, at La Fresne aerodrome.