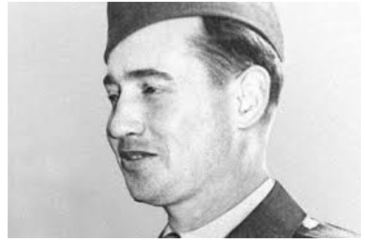 During the German Ardennes counteroffensive, armed with his bazooka, PFC Soderman was tasked to defend a key road junction. Soderman lost his assistant gunner to a heavy artillery barrage and he could hear enemy tanks approaching his.

He calmly waited in the darkness until he could clearly make out five enemy tanks.  He then stood up, completely disregarding his own safety launching a rocket into the lead tank, forcing its crew to abandon it as the other tanks pressed.  The daring bazookaman remained at his post all night under severe artillery, mortar, and machinegun fire, awaiting the next onslaught. It came shortly after dawn. Five more enemy tanks coming up a ditch to flank his position. SOderman waited until he had a good shot theb lept from his position of concealment and in full view of the tank gunners, deliberately aimed his weapon, launched his weapon disabling the lead tank.

The other vehicles, withdrew. Pfc. Soderman engaged enemy infantry, killing three and wounding several others, then disbursing the enemy platoon with a round from his bazooka.

Enemy reinforcements made Company K’s position untenable. Orders were issued for withdrawal to an assembly area, where Pfc. Soderman was located when he once more heard enemy tanks approaching. Knowing that elements of the company had not completed their disengaging maneuver and were consequently extremely vulnerable to an armored attack, he hurried from his comparatively safe position to meet the tanks.

Once more he disabled the lead tank with a single rocket, his last; but before he could reach cover, machinegun bullets from the tank ripped into his right shoulder. Unarmed and seriously wounded he dragged himself along a ditch to the American lines and was evacuated.

Through his unfaltering courage against overwhelming odds, Pfc. Soderman contributed in great measure to the defense of Rocherath, exhibiting to a superlative degree the intrepidity and heroism with which American soldiers met and smashed the savage power of the last great German offensive