American Aviators were downed deep in enemy territory.  The area was completely

under enemy-control, making helicopter extraction impossible.   There was only one very slim chance of getting them out – a ground rescue.

A ground operation to an area occupied by several enemy battalions was a suicide mission.  But, SEAL Lieutenant Tom Norris never hesitated …

He led the rescue.

On the night of 10 April, Norris led a 5 man patrol to recover the Aviators, one of which was Lieutenant Colonel Iceal Hambleton, a senior Air Defense officer, and very high-value capture to the enemy.

The mission took Norris over  2000 meters into territory thick with enemy patrols, who were intent on finding Hambleton before the Americans did.  Ltc. Hambleton had a treasure trove of information in his head.

Norris located and extracted one aviator back through the same enemy-held territory but  Ltc Hambleton was still out there.  He was cut off from the river and had to be guided via a series of coded messages using military golf courses as directions.

11 Apr – Norris’ firebase was subjected to an extensive rocket attack.  Undaunted, Lt. Norris lead 2 additional rescue operations into enemy territory looking for Hambleton. Unsuccessful, Lt. Norris and his team had to wait for some clue as to where the missing American might be.

12 Apr – Forward Air Controllers located the Hambleton and relayed his coordinates to Lt. Norris.  Norris and one Vietnamese Sea Commando dressed up as native fishermen and navigated a small boat up-river.  They spent the night evading enemy boat patrols and dodging land observation posts as they moved up-river to the injured American.

They found Hambleton at dawn, loaded him on their small boat and covered him with a 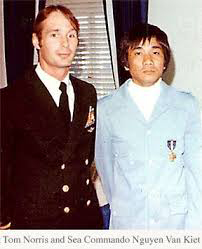 load of bamboo.  Norris and his Vietnamese comrade navigated the river back toward their Firebase doing their best to avoid patrols and riverbank look-outs.

As they approached friendly territory the riverbank erupted with fire. Norris swiftly called in an airstrike followed by a smoke strike to provide concealment as he made his way the rest of the way.

Thanks to Lt. Norris and Vietnamese Petty Officer Nguyen Van Kiet,  Ltc. Hamblin made it home.

The story was very loosely adapted to the silver screen in the movie Bat-21.