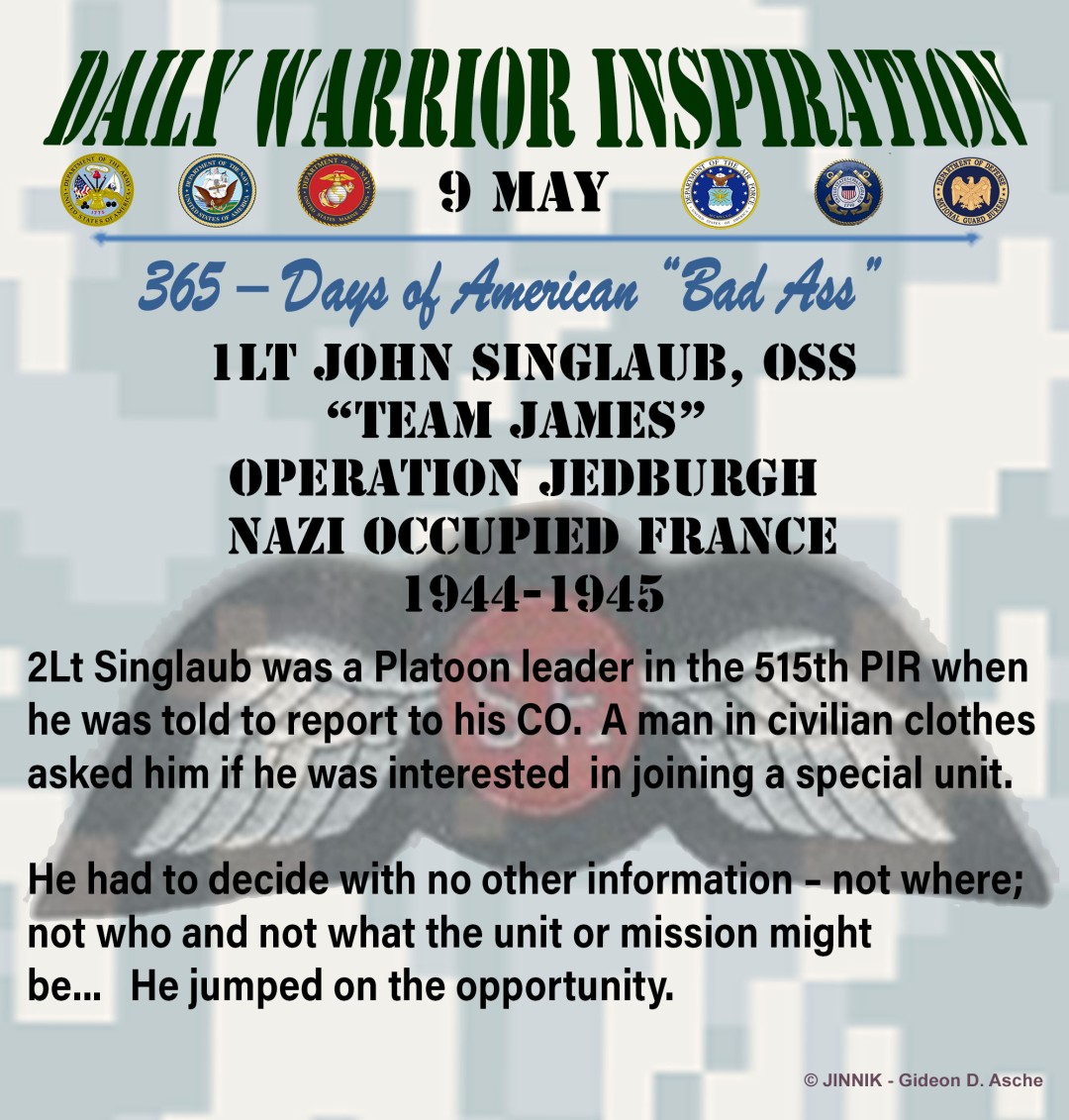 Regiment at Ft. Benning when he was told to report to his CO.  A man in civilian clothes asked him if he was interested in volunteering for a special unit.

He had to decide with no other information – not where, not who, not what the unit or mission would be …  He jumped on the opportunity.

In the next few months, he would be trained and deployed as an OSS agent,

OSS operators were some of the best-trained operatives in history.  All were multilingual, usually conversational in 3 or 4 languages, and fluent in at least two and became experts in demolitions, light weapons, Morse code, and Pathfinder operations.

A total of 101 teams of two to five, including 83 Americans, jumped into France, Belgium, and the Netherlands in the 48 hours before the D-Day drop. Other groups of Special Agents were dropped in as early as two years before D-Day to lay the foundation for the Jedburgh program.

1940’s kit was a bit different than today’s – the “shiny-ist” thing they had was a bulky, tube-powered wireless transceiver that had to be warmed up for 5 to 6 minutes before it would transmit and couldn’t be moved until the tubes cooled or the cathodes would warp.

Other standard weapons were the Colt 1911, the Grease gun, the Thompson, the M-1 Garand, and the Welrod, a suppressed pistol used to quietly dispatch enemy soldiers to meet their god.

There were no GPSs, no SAT-phones, no body armor, no Night Stalkers with QRF to come to the rescue if things turned to crap. They had what they with them when they jumped in. The mission, each other, and the acceptance of their fate was all they needed.

All OSS wore civilian clothes in the U.S., and most wore civies in combat zones. Technically, they were spies and eligible for summary execution if caught.  Unfortunately, summary execution was too merciful and un-entertaining for the Gestapo.

Jedburgh’s missions supported and bolstered existing operations. They would bring new intelligence, provide liaison between the advancing Allies and the Resistance. They participated in sabotage and other operations needed to cripple the German response to the invasion.  Consequently, the Nazis were forced to deplete resources to deal with the resistance leaving less than adequate assets to repel the allied invasion.

Without Operation Jedburgh, the D-day invasion would have never succeeded.  These mostly unknown warriors were what Wild Bill called “Dragon’s Teeth,” and he “sewed them freely into the enemy’s garden.”  Gen. William Donovan, was tasked with creating a clandestine force to operate behind enemy borders. He was successful, and the U.S. has actively maintained and operated the force Donovan created ever since.

Wild Bill referred to the OSS as his “League of Gentlemen” and OSS operations as “Sewing Dragon’s teeth in the enemy’s garden.”   Jedburghs went on to win Pulitzers, Nobel prizes, and become leaders in western society.

Here are some old Jedburghs and OSS Agents that you might recognize:

Julia Child (McWilliams) –  Special Operations Clerk. Now you know why her souse chefs were so jumpy when she barked orders.

Ronald Dahl – Author of the book that became the Charlie and the Chocolate factory movie.

Josephine Baker – A well-known cabaret dancer and a  black woman.

John Wayne, Yup… The Duke – He worked Internal security, Wayne did Snoop n Poops for Donavan inside the Pacific command. No one knew he was part of OSS but Donovan. The Duke used his celebrity to get close to anyone Wild Bill wanted to verify was loyal.

And the man who endured so many of my childhood inquisitions.

John K. Singlaub, MG – Commander, SOG, 1966-1968, a true Jedburgh even today. He is alive and well still serving his flag as a lecturer and guest instructor at  the USMA, West Point NY

If any of you Tier 1 guys think you might have what it took to work for Wild Bill Donovan, here are a few Job descriptions recruiters used.

That is one damn scary “Clerk” if you ask me.