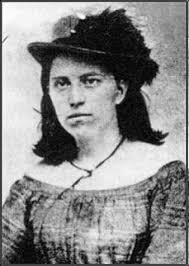 Nancy was an active participant in the American revolution having served at several battles in various capacities including the  Battle of Cowpens in South Carolina on January 17, 1781.

Hart could have been hewn from one of the mighty oaks of the Frontier she loved. At over 6 feet tall with large hands and feet she was not a slight woman.

Nancy was known to have a hot temper and “to take no shit” from anyone.  She was also Gen. Daniel Morgan’s cousin and close friend – apparently “badass” ran in the Morgan family.

Early in the revolt, Hart showed her metal when six British soldiers in pursuit of a rebel leader ransacked her farm searching for the Patriot. Hart denied knowing the man, although she had just helped him escape. The Tories didn’t believe her and for some reason, they shot one of her turkeys, then demanded she cook it and serve it to them.

They stacked their weapons in a corner of her home and demanded something to drink… Nancy Hart complied and as the soldiers drank wine, Hart sent her daughter to fetch water and secretly alert the militia that Tories were in her home.

Hart then discretely passed the loaded weapons through a space in the wall to her daughter outside. One of the soldiers noticed ½ their weapons were gone and tried to grab the remaining muskets. Hart gave one verbal warning, then shot the soldier dead to make her point. She held off the rest until militiamen arrived.

It was suggested that they shoot the prisoners but Hart said no, it would be a waste of powder, so she hanged the surviving Tories.

In 1912 workmen grading a railroad near the site of the old Hart cabin unearthed a neat row of six skeletons – Evidence of the Patriot Nancy Hart’s handiwork.