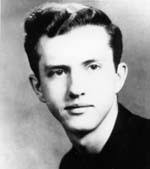 While serving as a machine gunner with Company D, Pendleton’s unit was attacked by a large hostile force.

When he discovered the terrain prohibited him from putting fire on his flank, Pendleton removed his weapon its tripod and took an exposed positioning with the weapon on his knee, to improve his firing angle.

A hostile infantryman jumped into Pendleton’s position, intent on throwing a grenade at his comrades.

Pendleton killed him then turned back and inflicted such heavy casualties on the enemy force that they retreated to regroup.

When a hostile grenade landed nearby, Cpl. Pendleton quickly retrieved and hurled it back.

Although he was burned and wounded by a grenade, he refused evacuation and continued to fire on the assaulting force.

Pendleton’s weapon was destroyed by a grenade. He grabbed a carbine and continued his stand until a mortar burst made a direct hit on his position.