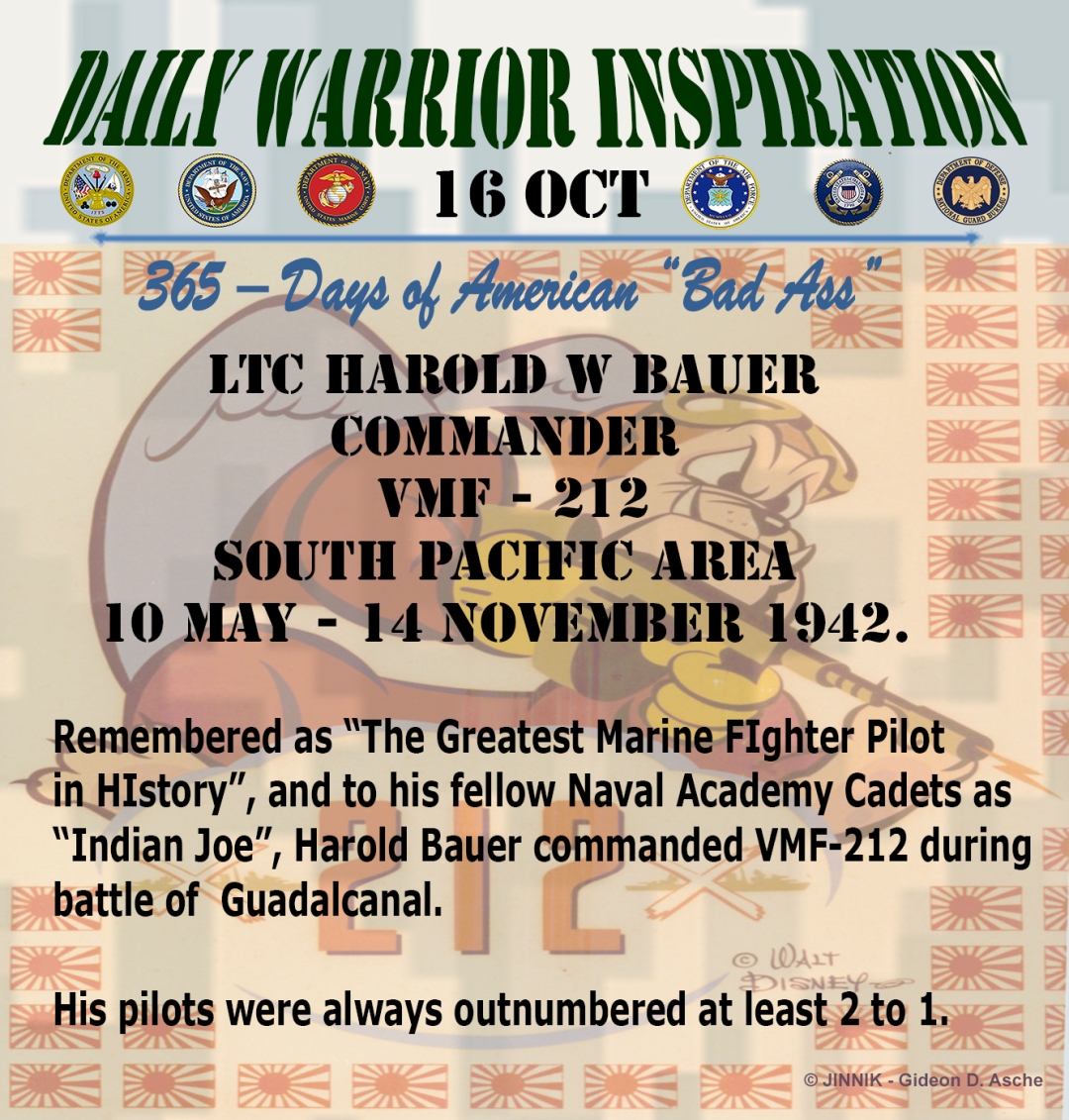 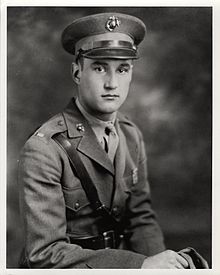 Known to his fellow Naval Academy Cadets as “Indian Joe”, Harold Bauer commanded VMF-212 battle of  Guadalcanal, engaging enemy aircraft in dogfights where he was always outnumbered at least 2 to 1.

On the 28th of Sept, Bauer destroyed an enemy bomber before it could drop its load on American positions. Then on the 3rd of Oct, he slashed 4 enemy escort fighters and sent the 5th running for the safety of the clouds… trailing smoke.

Ltc Bauer successfully led 26 planes on an over-water ferry flight of more than 600 miles on 16 October. While circling to land, Lt. Col. Bauer sighted a squadron of enemy planes attacking the U.S.S. McFarland.

Bauer added 4 kills to his resume before his aircraft ran out of fuel. His intrepid fighting spirit and distinctive ability as a leader and an airman, exemplified in his splendid record of combat achievement, were vital factors in the successful operations in the South Pacific Area.

The following is an excerpt from the after action report describing the action of Nov. 14th 1942 in which LTC Bauer was shot down and later declared MIA.

All of a sudden, tracers shot over my head. Upon looking back, I saw two Jap Zeros diving on us, shooting. At once, Joe turned and headed straight for one. Both he and the Jap were shooting everything. Then – Bang! And the Zero blew up, and Joe zoomed and made a turn for home. Tom and I chased the other Zero toward Tokyo but couldn’t catch him. Upon returning to the scene of Joe’s action (twelve or fifteen miles due north of the Russell Islands), I was unable to spot him. I saw an oil slick about a mile south of the spot where the Zero had gone in, and upon circling it saw Joe swimming with his life vest on. I went right down to within a few feet of him, and he waved both arms and jumped up out of the water. Then he waved me toward home. He was in good shape – no visible cuts. I tried to give him my life raft, but it wouldn’t come out, so I gave full throttle toward home.

landed and took off at once in a Duck (a Grumman J2F amphibian bi-plane) with Major Joe Renner. We were within ten miles of Joe and it got pitch black, so we had to return home. At daybreak the next morning (Nov. 15) we were on the site of the colonel’s landing with my flight of eight and the Duck. The only thing in sight were two Jap planes, which we shot down at once. We searched and searched the area but no sign of a soul. … So in my way of thinking, one of the following two things happened – either the Japs happened upon him and took him prisoner or the sharks got him. If the Japs have him, he is safe, in my mind, as he wore his lieutenant colonel’s silver oak leaves.