ships and Zeros in the dead of night. The flat-black PBYs were almost invisible in the night sky PBYs would swoop in flying at just 20 feet above the water. The enemy never knew they were there until the bombs started falling. In a flash, and before the Japanese even knew what hit them, the PBYs disappeared back into the darkness.

Japanese fighter pilots couldn’t see the PBYs from above and the PBYs skimmed the water’s surface, too low to use the Zero’s standard tactic of attacking from below. The PBY’s ability to fly at very low speeds also made it almost impossible to attack from the rear without overshooting the target due to the extreme difference in airspeed.  These new tactics and the intrepid courage of Black Cat pilots gave them the 9 lives they were known for. Few Black Cats were ever shot down. 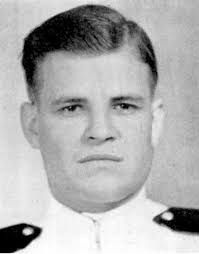 On 15 February, Gordon was on alert when the call came that several B-25 bombers had been shot down while attacking Japanese positions near Kavieng harbor.

LT Gordon unhesitatingly responded flying without hesitation into the heavily defended harbor. He defied close-range fire from enemy shore guns. In range and full view of enemy gun emplacements, Gordon made 3 separate landings, picking up 9-American aviators, most of them injured.

Despite the cumbersome flying boat being dangerously overloaded, Gordon managed to get her off the water. A task made even worse by heavy swells and an almost total absence of wind.

Gordon set a course for home but got a report of another US bomber in the water. Six Americans were in a rubber raft just 600 meters off the coast – Within small arms range. Gordon immediately altered course, turning back to pick up the downed Americans.

Gordon again risked his life to set his plane down under direct fire of the main defensive battery on Kavieng in huge swells from artillery detonations. The PBY began taking on water fast.

Six more American aviators clambered aboard as LT Gordon tried to restart his engines. The PBY waterlogged and dangerously overloaded, with 24 men, including the nine-man crew.

Gordon described the event to the Arkansas Democrat-Gazette in 2002.

“The breakers could throw you 35 or 40 feet in the air,” “You had to keep the nose up till you reached takeoff speed of 55 knots or the aircraft would flip and everybody likely would be killed.”

With crewmen bailing water with buckets, Mr. Gordon got the bird airborne and flew to the safety of a U.S. base.

The last line of Lt Gordon’s MOH citation sums it up well:

“By his exceptional daring, personal valor, and incomparable airmanship under most perilous conditions, Lt. Gordon prevented certain death or capture of our airmen by the Japanese.”