While serving as a combat Infantryman, PFC Colalillo found himself, along with the rest of the squad, pinned down by heavy enemy machine gunfire.

In an act reminiscent of the epic poem, Colalillo  jumped to his feet and shouted 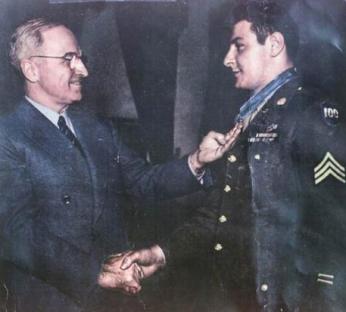 Then the 19-year-old Soldier ran forward, firing his weapon and shouting encouragement to the other soldiers holding the line. His fellow soldiers did follow – Inspired by his example, they advanced.

His weapon rendered useless by shrapnel, Colalillo found an unmanned .50-Cal on top of a friendly tank.  The weapon was unmanned simply because it was completely exposed and suicide to man it in that situation.

With enemy rounds pinging and hissing all around him, Colalillo lit up an enemy position with amazing accuracy eliminating at least ten enemy soldiers and destroying their crew-served weapon.

At some point, the 50-Cal was damaged and jammed.

The insanity of standing on top of a tank in the middle of a gunfight must have crossed the young Soldier’s mind – He borrowed a “Grease Gun” from the tank crew and set out to engage the enemy on foot.

Out of ammunition, the Armored units were forced to withdraw.  Colalillo voluntarily remained behind to provide covering fire. When he finally withdrew, Colalillo carried a seriously wounded American several hundred yards across open terrain through a hail of enemy fire, saving his life. 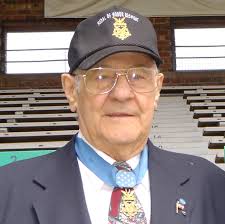 His courage gave tremendous impetus to his company’s attack. Colalillo personally killed or wounded 25 of the enemy in bitter fighting, and assisted wounded soldiers in reaching the American lines at great risk of his own life.

Mike Colalillo went to that last muster in December of 2011.  He reached the ripe old age of 86.