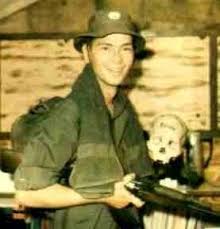 His Patriotism wouldn’t let him refuse military service or dodge the draft….

Joseph declared himself a Conscientious Objector, then and enlisted in the Army as a Combat Medic.

Sp4. Lapointe’s patrol was advancing from the landing zone through the valley when it was ambushed.  Two soldiers on point were severely wounded and the call for a “Medic” rang out. 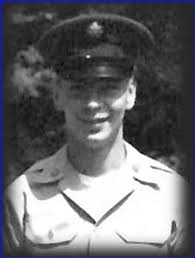 Lapointe ran forward through heavy fire and had to crawl directly in view of an enemy bunker in order to treat one of his wounded. The rest of his squad tried to provide covering fire but was ineffective against the heavily fortified enemy position,

He rendered aid to one man while he shielded the wounded soldier with his body.  In spite of his painful wounds, Sp4 Lapointe provided aid until he was again wounded and knocked to the ground by a blast.

In spite of being knocked to the ground and badly wounded, Lapointe moved back into position where he could treat the 2 wounded soldiers.

An enemy grenade killed Sp4 Lapointe that day but he fulfilled his commitment to both his faith and his country.

“Spc Lapointe’s courageous actions at the cost of his life were an inspiration to his comrades. His gallantry and selflessness are in the highest traditions of the military service and reflect great credit on him, his unit, and the U.S. Army.”

Note: Two other MOH recipients were Conscientious Objectors: Thomas W. Bennett & Desmond Doss.  Both men declared CO status based on their faith then volunteered to serve in combat unarmed.  Both were awarded the Medal posthumously.