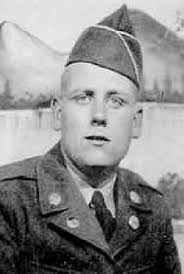 Pfc Hanson was serving as machine gunner in a defensive position, covering 2  strategic hills separated by a wide saddle. His position was attacked by a numerically superior enemy.  The unit was ordered to pull back to a defensible position,

After repositioning command discovered that Pfc. Hanson remained to provide covering fire for the withdrawal.  Pfc. Hanson’s assistant gunner and 3 riflemen had been wounded and had crawled to safety and reported that Hanson was maintaining a lone-man defense, giving them the chance to pull out.

The Platoon reorganized, counterattacked, and retook the original positions at approximately 0530-hours.

Pfc. Hanson was found in front of his emplacement, his machine gun ammunition expended, his empty side-arm in his right hand… and a bloody machete in his left hand.

More than  20 dead enemy soldiers lay around the young Warrior, who gave his life that his brothers might live.