In this old paratrooper’s experience, the only group of men that are as strange as Combat Medics are Search and Rescue Pilots.

Neither of them has a lick-o-Sense once they hear a fellow Soldier cry out for help.

Navy Lt. Clyde Lassen is no exception to the rule and  when he heard  “Mayday-Mayday-Mayday” crackle

through his UHF – There was NOTHING that could stop him from responding.

Two American aviators were shot down during night operations against enemy forces in North Vietnam.

Lt. Lassen and his crew launched a Search and Rescue (SAR) mission Just before 0100hrs. 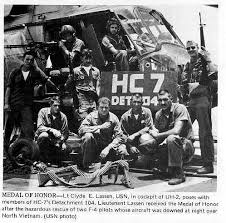 The 2 survivors were located on a knoll in an area from which recover would be relatively simple except for the heavy concentration of enemy fire focused on Lassen’s bird.  Heavy machinegun fire can make it hard to concentrate and nighttime – no lights – confined area extraction requires concentration and skill.

In spite of accomplishing the task the survivors were unable to reach the aircraft because of heavy brush and enemy fire.

Lt. Lassen pulled pitch and went looking for an alternate extraction site.  He found an extremely tight area between 2 trees where that the survivors could swiftly relocate to.  Landing a 52’ long helicopter with a 44’ rotor diameter there in the dark, would be on the high end of Almost impossible

With the aid of illumination flares, Which drew enemy fire, Lt. Lassen hovered in  between 2 trees just as the last flare burned out, Illumination was lost , and the aircraft experienced a blade strike on one of the trees causing an out of control flight situation.

Expertly righting his aircraft and maneuvering clear, Lt. Lassen pulled out but remained in the area to make another rescue attempt.   after another unsuccessful, illuminated rescue attempt, and with his fuel dangerously low and his aircraft significantly damaged, he made one last attempt – impossible in the dark. We didn’t have NVG in 1968. Fully aware of the consequences of revealing his position to the enemy, The Lt turned on his landing lights.

He made the landing and extracted both survivors and flew NOE, through exceptionally

heavy fire to the coastline. Once feet wet, the danger of running out of fuel was front and center – the UH-2’s “20-Min Fuel” light had been illuminated for about 15 mins.  He landed safely aboard U.S.S. Jouett (DLG-29) with than 5 mins fuel available.

LT Lassen is the first Naval Aviator and fifth Sailor to earn the MOH. He is one of only 3 Naval Aviators to recieve the award  while underway at sea.  Lassen retired with the rank of full Commander in 1982.

The Commander made his last pre-flight in 1994 when he passed after a battle with cancer.

USS Lassen, a Destroyer,  was commissioned and named in his honor in April, 2001.