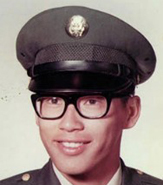 After a violent explosion ripped a hole in the bunker roof.  Cpl. Kawamura sprang into action,  ran toward the door,  engaging the enemy with his rifle.

A second satchel-charge was tossed into the bunker landing amongst the dazed paratroopers.

Although close to an exit and safety, Cpl. Kawamura wheeled around and threw himself on the charge.

Giving his life for his rothers.

The President of the United States of America, in the name of Congress, takes pride in presenting the Medal of Honor (Posthumously) to Corporal Terry Teruo Kawamura (ASN: 10127100), United States Army, for conspicuous gallantry and intrepidity at the risk of his life above and beyond the call of duty while serving with the 173d Engineer Company, 173d Airborne Brigade, in action against enemy aggressor forces at Camp Radcliff, Republic of Vietnam, on 20 March 1969. An enemy demolition team infiltrated the unit quarters area and opened fire with automatic weapons. Disregarding the intense fire, Corporal Kawamura ran for his weapon. At that moment, a violent explosion tore a hole in the roof and stunned the occupants of the room. Corporal Kawamura jumped to his feet, secured his weapon and, as he ran toward the door to return the enemy fire, he observed that another explosive charge had been thrown through the hole in the roof to the floor. He immediately realized that two stunned fellow soldiers were in great peril and shouted a warning. Although in a position to escape, Corporal Kawamura unhesitatingly wheeled around and threw himself on the charge. In completely disregarding his safety, Corporal Kawamura prevented serious injury or death to several members of his unit. The extraordinary courage and selflessness displayed by Corporal Kawamura are in the highest traditions of the military service and reflect great credit upon himself, his unit, and the United States Army.