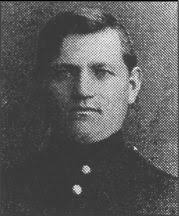 Marine Sgt. Matej Kocek was assigned to the Army’s 2nd Infantry. As part of the expeditionary forces in France during WW1.

He has th4e distinction of being the recipient of both the Army and Navy Medals of Honor.

He affixed bayonet and attacked the enemy gun crew, silencing the weapon.

Later during the same battle, Kocek found a group of disorganized and retreating French soldiers.

Sgt. Kocek took command and organized the 25 French colonial soldiers back into a fighting unit then led them in the attack destroying additional enemy gun emplacements.

MOH Certificate from US Dept of the Army

When the advance of his battalion was checked by a hidden machine-gun nest, he went forward alone, unprotected by covering fire from his own men, and worked in between the German positions in the face of fire from enemy covering detachments.  Locating the machine -gun nest, he rushed it and with his bayonet drove off the crew.  Shortly after this he organized 25 French colonial soldiers who had become separated from their company and led them in attacking another machine-gun nest, which was also put out of action.

MOH Certificate from US Dept of the Navy

For extraordinary heroism while serving with the 66th Company, 5th Regiment, 2d Division, in action in the Viller-Cottertes section, south of Soissons, France, 18 July 1918. When a hidden machinegun nest halted the advance of his battalion, Sgt. Kocak went forward alone unprotected by covering fire and worked his way in between the German positions in the face of heavy enemy fire. Rushing the enemy position with his bayonet, he drove off the crew. Later the same day, Sgt. Kocak organized French colonial soldiers who had become separated from their company and led them in an attack on another machinegun nest which was also put out of action.