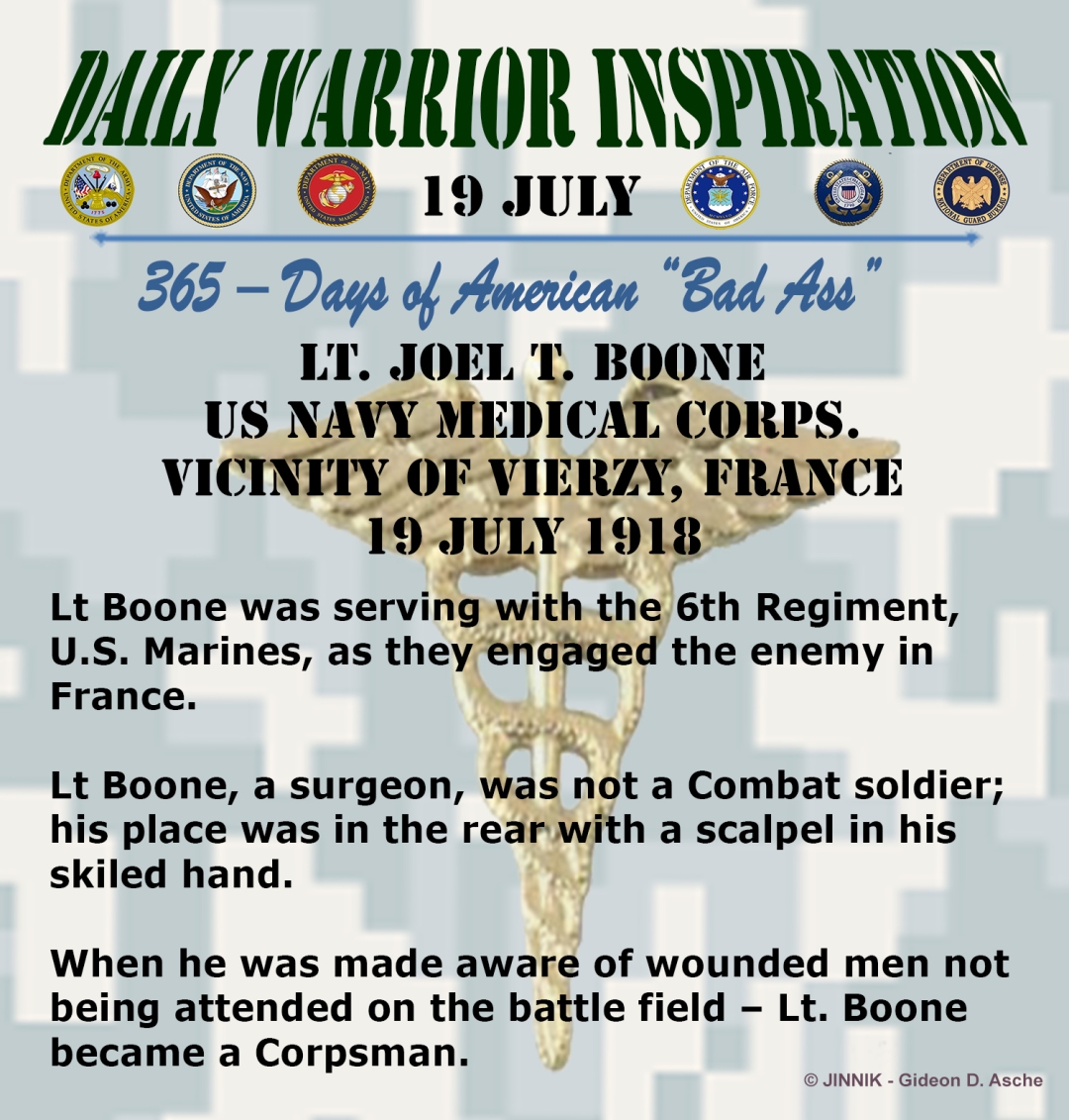 Lt Boone was serving with the 6th Regiment, U.S. Marines, as they engaged the enemy in France.  Boone, a surgeon, was not a Combat soldier; his place was in the rear with a scalpel.

When he was made aware of wounded men not being attended on the battlefield – Lt. Boone, Doc” to his bones, became a Corpsman.

With absolute disregard for personal safety,  Surgeon Boone left the safety of his rear position in a ravine and rushed forward to the battle area. In spite of there being no cover and his being the target of all manner of enemy fire and clouds of caustic gas, Surgeon Boone administered first aid to his wounded Marines.

When Boone’s supply of dressings and medicines was exhausted, he moved through a heavy barrage of large-caliber shells and gas to return to the rear and get more supplies.  He returned on a “borrowed” motorcycle, with a sidecar load of medical supplies.

Boone continued this cycle of action – Dodge bullets, render aid, dodge bullets to go get supplies, return to dodge more bullets, for the remainder of the battle saving the lives of several Marines.  (Not the standard Job Description for a Hospital surgeon.)

Lt. Boone remained in active service and went on to be personal physician to 3 first families.

In April 1945, Boone was promoted to Commodore and assigned to the 3rd Fleet as senior Medical Officer.

Boone was responsible for the evacuation and medical care of prisoners of war at the
Omori POW camp in Tokyo. When the detachment left the safety of USS San Juan and headed for the coast, Commodore Boone was in the lead Higgins boat.

He was also the only one who went unarmed.

At the Close of WW2 Commodore Boone was selected by  Admiral Halsey to liberate American POW’s in Japan and represented the Navy Medical Department during surrender ceremonies on the deck of the USS Missouri.

Joel Boone retired with the rank of Vice-Admiral in 1950.

The USS Boone (FFG-28) and the Joel T. Boone Naval Branch Medical Clinic in Little Creek, VA, are named in his honor