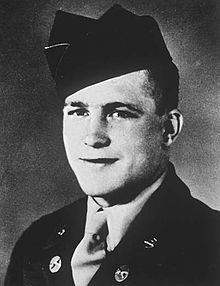 Pfc Wilson, a Combat Medic, accompanied his unit through the hilly country near Opari.

The main body of the company was passing through a narrow valley when the enemy laid down a deadly barrage of mortar, automatic-weapons and small-arms fire

Casualties mounted as the company tried to fight their way out of the chokepoint.

When the enemy threatened to encircle and isolate the company, the order to withdraw was given.  Pfc Wilson remained to assist the wounded until the last man had pulled back.

Once the company had repositioned, Wilson noticed a soldier, who had been assumed KIA, moving and trying to crawl to safety. In spite of the suicidal nature of his quest and the protests of his comrades, Pfc. Wilson ran forward in search of his comrade.

Two days later a patrol found him lying beside the man he returned to aid.

Pfc Wilson had been shot several times while trying to shield and administer aid to the wounded man.