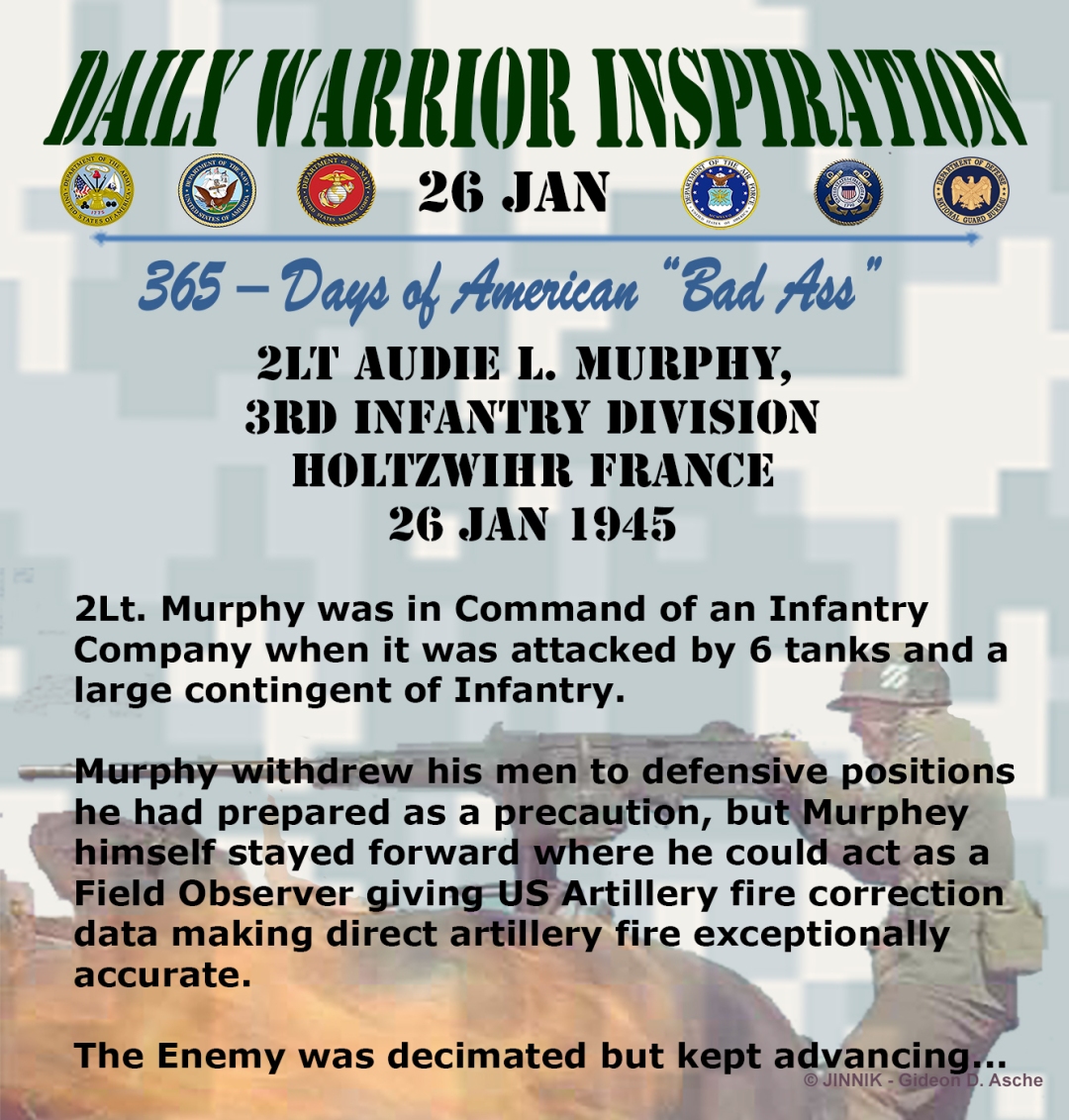 2Lt. Murphy was leading a company of Infantry advancing through the  Holtzwihr area

when they were attacked by a large contingency of enemy infantry accompanied by a squadron of 6 tanks.

2Lt. Murphy withdrew his men to defensive positions he had previously prepared as a precaution, but Murphey himself stayed forward where he could act as a Field Observer giving US Artillery fire correction data making direct artillery fire exceptionally accurate.  Murphy’s artillery placement decimated the advancing enemy but they kept advancing.

As Murphy was surrounded by advancing infantry and eyeball to eyeball with enemy armor, Murphy climbed up on a Burning American Tank manning its 50-Cal. Alone and exposed to enemy fire from 3 sides, he managed to place his fire accurately on the advancing enemy killing dozens and causing the attack to falter.

For more than an hour, the enemy attempted every possible means of assault to eliminate what German tank commanders referred to as,  “der Verrückter auf dem brennenden Panzer” (the lunatic on the Burning Tank).

Murphy held his ground with Enemy Infantry as close as 10 meters before he dispatched them with his 50-Cal. He was wounded but ignored the wound and continued to deliver death to his enemies until his ammunition was exhausted.

When Murphy was finally forced to abandon the burning tank he swiftly made his way to the Company area. He refused medical attention and organized the company in a counterattack routing the advancing enemy.

Murphy is credited with 35 to 50 confirmed kills and turning the tide of the battle to victory.

Over the years Murphy was known to joke that if he ever got shot, “it will be in the ass,” because he was really a coward at heart. He never lived down the fact that when he was finally wounded – The exit wound – Yup you guessed it – in his Ass Cheek.

Audie Murphy continued to serve his country as an officer in the Texas National Guard attaining the rank of Major. He trained troops for the Korean conflict but in spite of his request to be sent to Korea, Murphy was kept in Texas to train deploying soldiers. He remained with the USAR until his transfer to the Retired Reserve in 1969. – he did a little acting over the years too.

Maj. Murphy was killed On 28 May 1971, when the private plane in which he was a passenger crashed into Brush Mountain, near Catawba, Virginia. The pilot and four other passengers were also killed.

“2Lt. Murphy’s indomitable courage and his refusal to give an inch of ground saved his company from possible encirclement and destruction, and enabled it to hold the woods which had been the enemy’s objective.”