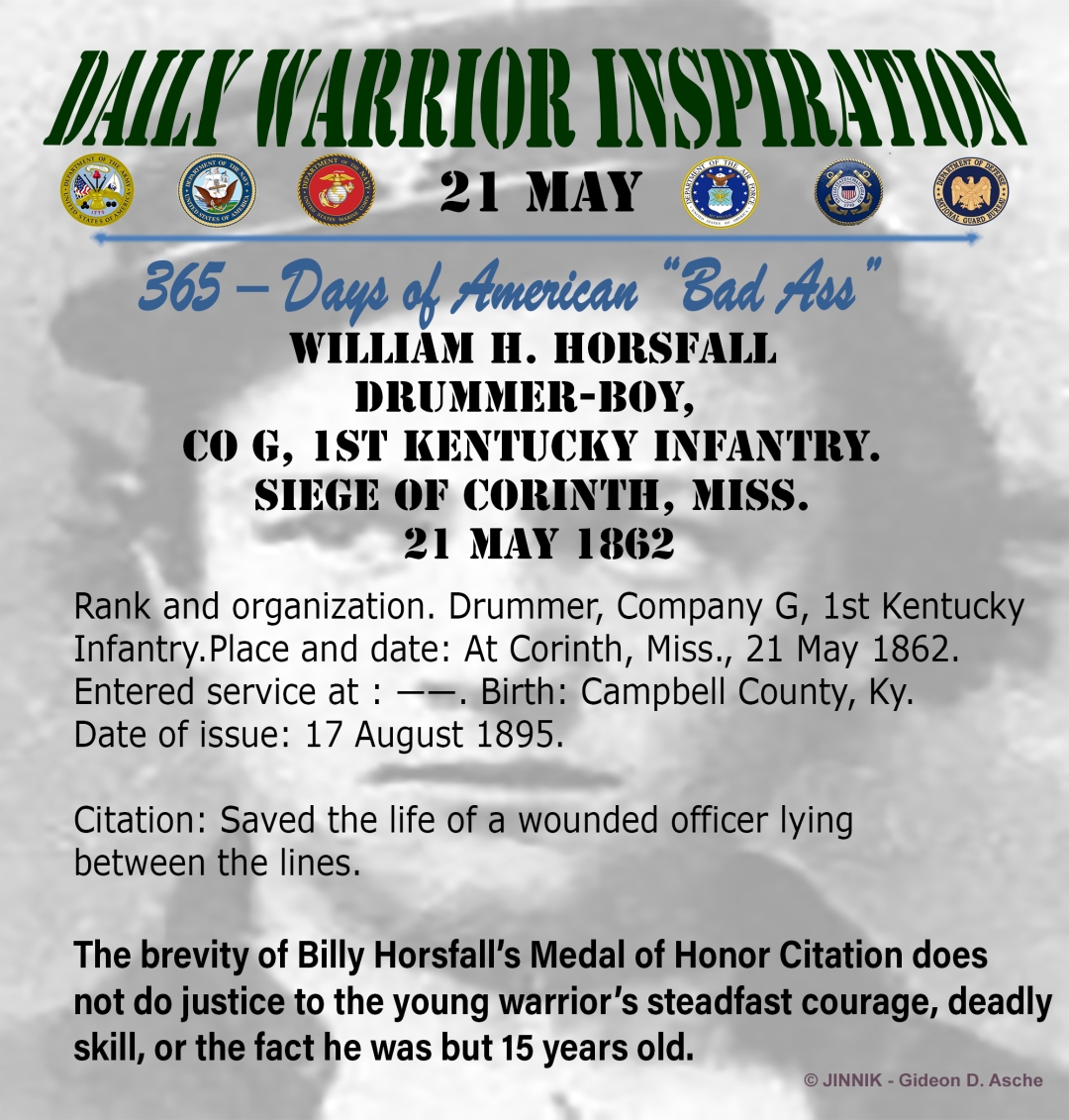 Citation: Saved the life of a wounded officer lying between the lines.

warrior’s steadfast courage.   It never mentions that by the age of 15, the 4’3” tall schoolboy, was a veteran of a half-dozen of the Western Theater’s most significant engagements, and survived.  Billy gained a reputation for courage and was known to be a “Gawd awful deadly sniper.” Billy provided cover by picking off officers and other key enemy soldiers at a distance.

The other thing missing from Horsfall’s MOH citation is his enlistment date, that’s because although he was too young to enlist, he already served in combat.  In December of 1861, at the age of 14, Horsfall stowed away on a steamship with a Union regiment heading south to fight.   He later enlisted in Company G of the 1st Kentucky Volunteer Infantry as a Drummer Boy. – His enlistment papers stated his occupation as schoolboy.

At the Siege of Corinth, Billy was part of a daring charge against a superior enemy. G Co. took heavy casualties, including Billy’s Captain, who fell severely wounded between the lines.  That was Billy’s Captain, and Bill wasn’t leaving him out there.

Drummer Bow Billy Horsfall ran back into the open, completely exposed to enemy snipers, most of whom had been trying to get a clean shot at Billy anyway. At 4’2 and maybe 105 lob soaking wet, Billy mustered up the strength to drag the much larger man out of the line of fire to where stretcher-bearers could tend to him.  – Captain Williamson survived his wounds.

The Drummer Boy Billy Horsfall earned the Medal of Honor.

Later in life, Horsfall described the incident to a local journalist in a matter of fact manner with no recognition of the valor he had exhibited as a boy.

“Lt. Hocke, approaching me, said, Horsfall,
Captain Williamson is in a serious predicament,
rescue him if possible. –

So I placed my gun against a tree and in a stooping run,
gained his side and dragged him to the stretcher-bearers,
who took him to the rear.”

William H. Horsfall, He continued to fight with the 1st Kentucky for the rest of 1862. He was captured at Stones River, Tennessee, but used his youth to escape. As he put it –  “I was surrounded by hostile infantry, but the Rebels took pity my youth, enabling me to run for my life.”